An EDO Qld analysis of the Adani’s latest Black-throated Finch Species Management Plan shows that, compared with the previous proposals, the company has cut thousands of hectares of core habitat from an offset area it is proposing to set aside for the critically-endangered species.

The area includes a 2000-plus hectare block lost to a competing coal miner, indicating the company may be experiencing difficulty in legally securing parts of the offset area covered by potential neighbouring mines.

The analysis shows Adani going backwards in its commitments to the Black-throated Finch, and highlights major weaknesses in the document central to the company’s Carmichael mine proposal.

This comes at the same time Adani is attempting to strong-arm the Queensland Government into approving the diminished plan.

A backwards step for the Black-throated Finch

As reported in The Guardian this week, the latest version of Adani’s Black-throated Finch Species Management Plan shows the company is going backwards on the environmental offset area for the vulnerable species.

A side-by-side comparison of two recent versions of the species management plan shows Adani has removed an estimated 2000-plus hectares of land from the environmental offset area it originally intended to set aside for the endangered Black-throated Finch. 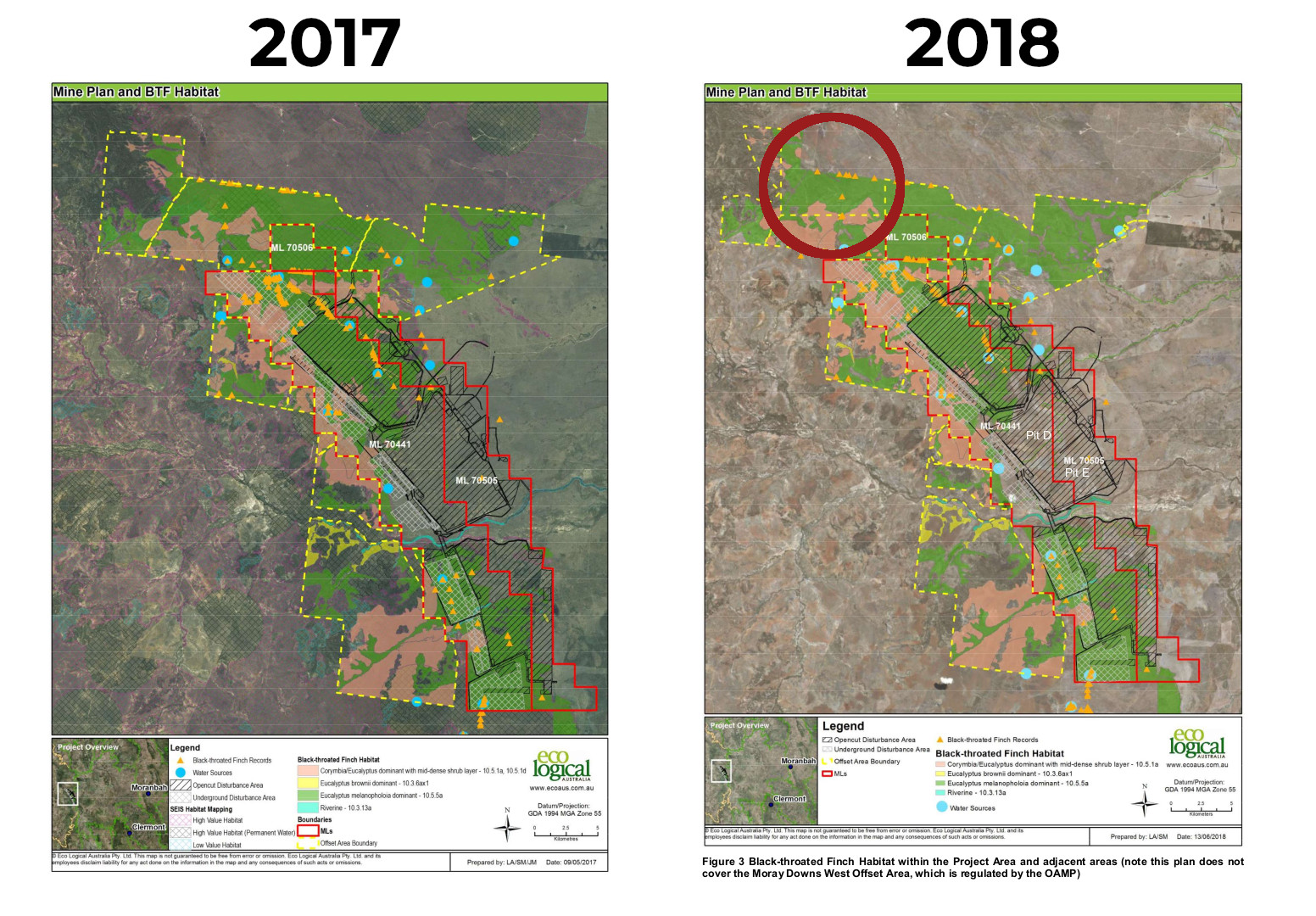 This is land that Adani’s own research indicates is high-quality habitat for the species, with surveys showing numerous sightings of the finch and at least one nesting site.

The bulk of this land is contained in a block to the north of the proposed mine site, in an area currently under a mining tenure belonging to MacMines Austasia for its China Stone project.

Until December 2018 Adani’s Black-throated Finch Species Management Plan proposed to go beyond the minimum requirements of its approved 2016 Biodiversity Offset Strategy and include a Black-throated Finch conservation area within the China Stone project mine lease area.

Its removal could indicate potential problems in Adani’s ability to legally secure land under competing mining tenures for its environmental offsets, which also may involve a future Land Court battle with MacMines Austasia over protection of the offset area.

This has broader implications for the remaining offset area, given much of it is under a mining tenure belonging to Clive Palmer’s Waratah Coal for its Alpha North project.

If the land is under mining tenure belonging to another company, it may face legal difficulties securing its land for conservation purposes.

As community groups have found in the Land Court, environmental offset areas have limited or no protection against competing mining interests under current Queensland legislation (unless they are made national parks).

Given this, without an agreement with MacMines Austasia, it may be difficult for the company to convince the Queensland Government that their remaining offset area is legally secure when much of it rests on land that another company intends to dig up for coal.

Leadership on the Black-throated Finch

Given the difficulty Adani is having securing sufficient offset areas for the Black-throated Finch, and given so much of the core habitat of the species rests on mining tenures, EDO Qld would expect the government to publish its Bioregional Management Plan before any further consideration of Adani’s proposal proceeds.

It’s appropriate in these circumstances for the Department of Environment and Science to take a leadership role on this issue, and dictate how the Finch should be protected before big mining companies carve up and destroy critical habitat for coal.

More broadly, this issue demonstrates that the current Queensland environmental offset framework fails to ensure that offset areas can be legally secured when a species is under threat.

This would include, for example, further definition of ‘legally secured’ to ensure the area is permanently and legally protected from being destroyed, prior to the commencement of mining.

Clarity in this legal area would provide far more confidence to community groups who seek to protect our unique wildlife from extinction, as well as developers and other stakeholders who require clear guidelines to ensure it remain compliant with the state’s environmental laws.