The Australian Greens announced an agreement in the Senate which will block the handover of federal environmental approval powers to the states.

Across Australia, Environmental Defenders Offices have expressed strong concerns that delegating federal environmental powers to state governments would create a weak, patchwork regulatory system that would fail to protect our unique natural environment.

In Queensland, EDO Qld has staunchly opposed the Queensland Draft Approval Bilateral Agreement, which would have handed responsibility for areas of great national and international significance – such as the Great Barrier Reef and other World Heritage Areas – to the Qld state government.

Many others have joined us in this opposition and we congratulate you all for your efforts to support good governance in keeping environmental protections strong.

In particular, we congratulate the Australian Greens Leader Senator Christine Milne, and Queensland Senator Larissa Waters and team for their work in the Senate.

We also congratulate the many groups and individuals who have worked so hard to maintain strong protections for the Great Barrier Reef: tourism operators, Fight For The Reef, the Places You Love Alliance, Australian Conservation Foundation, Australian Marine Conservation Society, WWF Australia, Indigenous advocates, the Wilderness Society and many others.

And we congratulate you, our members and supporters over 140 of whom who took the time to lodge submissions using EDO Qld submission template opposing the Queensland Draft Approval Bilateral Agreement. Thank you for making your voices heard to speak out for stronger environmental laws and a vibrant, healthy environment.

A report released today by the Places You Love Alliance, and prepared by the Australian Network of Environmental Defender's Offices, has shown that State laws are not an adequate replacement for Federal Environment Protection and Biodiversity Conservation Act 1999 (EPBC Act). This comes as the Federal Government continue to try and devolve EPBC approval powers to the states. This move has been justified on the basis of duplication, but, as this report shows, State laws do not always protect the same subject matter as the EPBC Act does.

The listing of protected species and communities in Queensland, compared with Federally, is not the same - giving rise to the possibility that protection will be reduced for those ecological attributes in Queensland. There are also concerns over Queensland Government under-staffing, offsets policy, and third party objection rights being inadequate to replace the Federal framework.

A summary table assessing whether state laws incorporate EPBC protections shows Queensland as one of the worst performers: 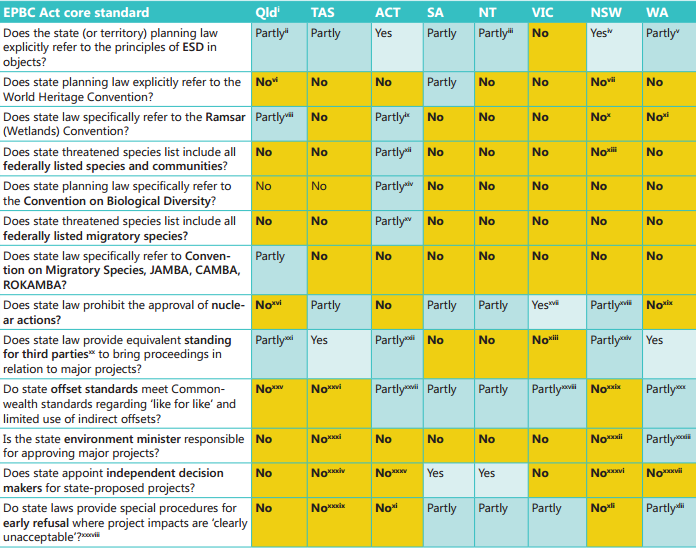