The Land Court has handed down a decision effectively recommending Stage 3 of the New Acland mine be rejected unless much stronger noise limits are imposed on the project.

The new EA includes conditions that were recommended as a result of the remitted Land Court rehearing held in November last year, including strengthened noise restrictions.

New Acland Coal Pty Ltd still needs to secure more approvals from the Queensland Government before the expansion can proceed, including its mining leases, and its associated water licence for taking or interfering with underground water.

The Court of Appeal is also currently considering an appeal by EDO Qld's clients, the Oakey Coal Action Alliance Inc, which may impact the validity of this EA approval. One potential outcome is that the original Land Court recommendation from 2017 that the State Government refuse the Stage 3 expansion be reinstated.

Queensland’s Land Court has recommended much-improved restrictions on noise levels allowed from any work undertaken on Stage 3 of the New Acland mine in its remitted decision handed down today.

The conditions recommended by the Land Court would see noise levels restricted to 35 decibels during evening and night periods, significantly stronger than the noise levels imposed by the Department of Environment and Science.

The decision shows the original restrictions placed on the mine failed to adequately protect the local farmers from the noise impacts of the mine.

It is now down to the State Government to ensure the decision of the Land Court is respected.

Following that, it's up to the Department of Environment and Science to respect the impartial decision of the Land Court and follow the recommendation to refuse the mine unless the Coordinator-General's conditions are amended. 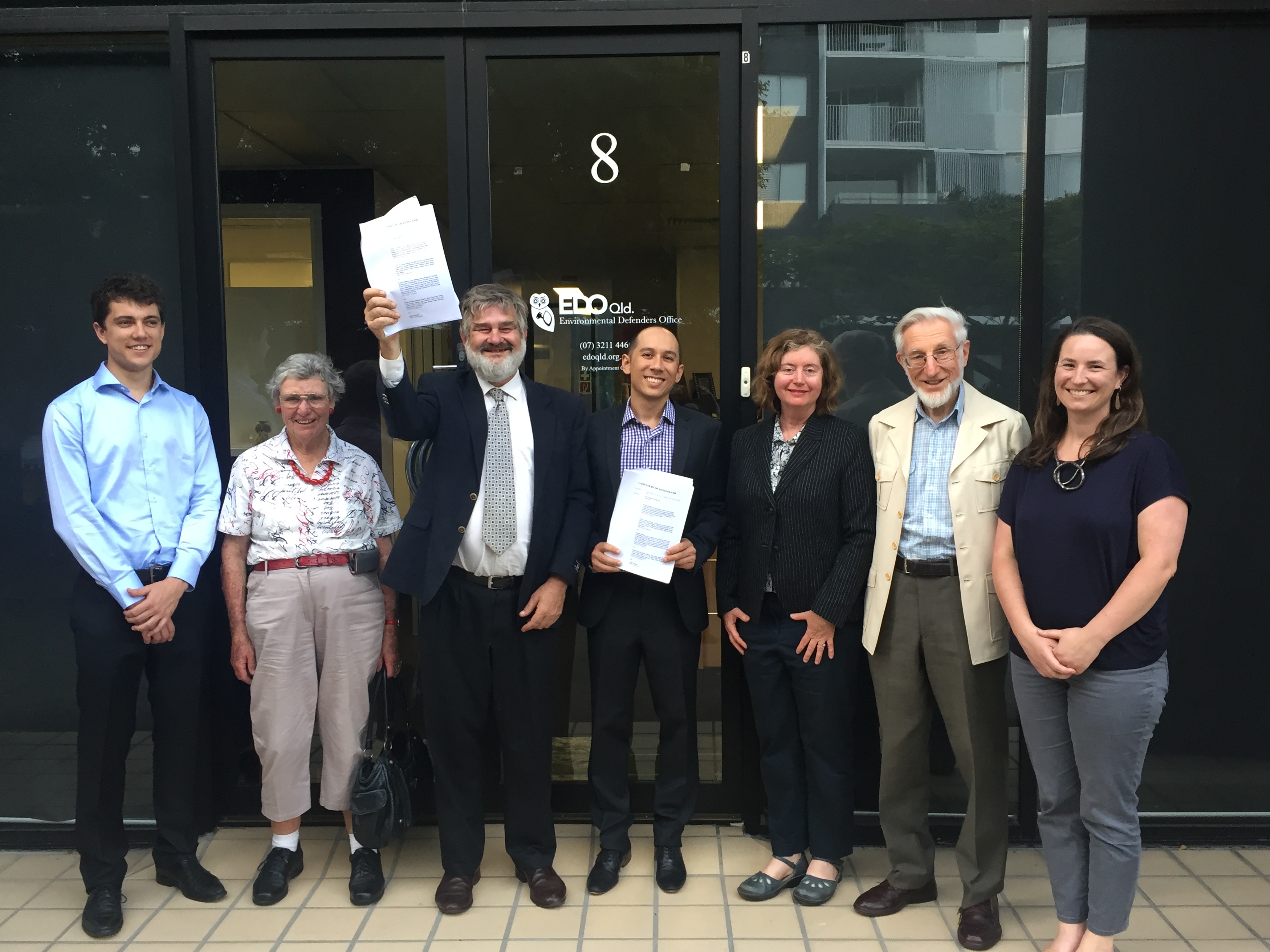 Above: Community objectors with EDO Qld staff and volunteers

Oakey Coal Action Alliance, as supported by Barrister Dr Chris McGrath and EDO QLD, is preparing for the hearing in the Land Court in Brisbane on 2 to 4 October 2018. To recap, it will be a limited rehearing of the 99 day Land Court hearing before Member Smith in 2016-17 following judgment and orders of the Supreme Court summarised here.

Oakey Coal Action Alliance, New Acland Coal and other objectors for the remitted Land Court hearing are preparing written submissions for the next Court date on 20 August 2018. OCAA’s request for an adjournment of the matter pending the outcome of its appeal to the Court of Appeal was not granted by the Land Court.

On 20 June 2018, the Land Court published directions outlining the procedure for the remitted Land Court hearing, accessible here. The Land Court did not grant Oakey Coal Action Alliance’s (OCAA’s) request for an adjournment of the matter pending the outcome of its appeal to the Court of Appeal. NAC, OCAA and other objectors will make written submissions before the next Court date on 20 August 2018.

The future of the Stage 3 expansion of the New Acland Coal (NAC) mine will be remitted back to Queensland's Land Court for limited further consideration, following a decision of the Queensland Supreme Court on 28 May 2018.

The Queensland Supreme Court today handed down final orders in the judicial review of the Land Court's decision sought by NAC. The orders do not overturn the factual findings of the Land Court but remit the decision back to a different Member of the Land Court for further consideration, including a reconsideration of legal conclusions in respect of noise and excluding all consideration of groundwater quantity impacts (which will be the subject of a further assessment in an application for an Associated Water Licence). Read our analysis here.

Qld's Supreme Court has made orders for further submissions regarding the final orders for the judicial review. Final orders will likely be heard on 23 May 2018. Stay tuned.

Qld's Supreme Crt has delivered its judgment in relation to New Acland Stage 3, referring the matter back to the Land Court. EDO Qld will consider the judgment carefully and discuss it with our clients, OCAA. Judgment: https://bit.ly/2I4RWfn

On 31 May 2017, in an unprecedented and historic decision, the Queensland Land Court recommended outright rejection of the New Acland Coal (NAC) Stage 3 mine expansion, after the most intense factual scrutiny ever applied by the Land Court to a mining project.

The decision followed one of the largest environmental cases in Australian history* where approximately 40 community objectors (12 active in Court) challenged the expansion of the mine by submitting evidence on threats to water, air quality and farming businesses

On 15 June 2017 NAC filed for judicial review of the Land Court’s decision, alleging the Member made numerous legal errors and had apprehended bias. (Read the following comment from our client). NAC also applied to stay (or hold) both the Land Court’s recommendation and the state government’s final decision making powers on the relevant approvals until the outcome of the judicial review.

On 23 June 2017, in another win for farmers, Queensland’s Supreme Court rejected New Acland’s bid to freeze the Land Court's recommendation. (Read the following Media Release from our client).

On 17 July the Supreme Court joined the Chief Executive of the Department of Environment and Heritage Protection as a party to the proceeding and made directions orders that will see the parties prepare for a trial.

The Supreme Court confirmed that the hearing of NAC’s judicial review application has been set down for 5 days from Monday 19 March 2018 before Her Honour Justice Bowskill.

The case began on 7 March 2016 and ran until 5 October 2016 and was re-opened at New Hope’s request in April 2017 to submit further groundwater evidence. The final evidence was heard on Thursday 20 April 2017, which was day 99 of the hearing. See the rolling feed from the 99-day hearing.

During the case, evidence challenged various claims made by New Acland mine owners New Hope, exposing:

Spotlight on prosecutions of Linc Energy

The drain on Acland farmers